The Executive Committee is charged with the formulation and guidance of HPFEB programs and services.

Standing Executive Committee members shall be the: 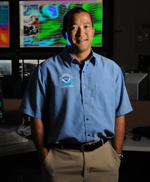 Ray is the Director for the Pacific Region of the National Weather Service and has served in this position since July 2013. Ray oversees offices in Hawaii, the Territories of Guam and American Samoa, the Republic of Palau, the Federated States of Micronesia, and the Republic of the Marshall Islands. The unique geography of the region includes the only NWS offices in the eastern and southern hemispheres and covers over 14 million square miles. Together these...

ay of forecasts and warnings covering everything from day to day weather to hurricanes and tsunamis.

Previously, Ray served as the Meteorologist in Charge of the Weather Forecast Office (WFO) and Director of the Central Pacific Hurricane Center from May 2011 through July 2013. In this role, he was responsible for the largest WFO in the nation.

After completing his Master’s Degree in Meteorology from the University of Hawaii while a Student Career Experience Program intern WFO Honolulu, Ray began his full time NWS career as a meteorologist intern WFO Los Angeles Oxnard in February 2000. After returning to Hawaii in 2003 as a general forecaster, he was promoted to senior forecaster in June 2006, warning coordination meteorologist in April 2007, Director of Operations in August 2010, and Meteorologist in Charge in May 2011.

Born and raised on the north shore of Oahu in Hawaii, Ray’s personal interest in weather started at a young age. He grew up in the outdoors – surfing, fishing, free-diving, hunting, hiking, backpacking and playing sports. He was fascinated how winds, waves, and rain influenced nearly all of his outdoor activities. Ray vividly recalls huddling in his parent’s plantation era house, a single wall structure built in 1937, as Hurricanes Iwa (1982) and Iniki (1992) demolished the island of Kauai just 80 miles away. The house held up to these very close calls and Ray remembers doing homework by candlelight in the month there was no electricity after Iwa. Ray continues to hike, free-dive, fish, hunt and dirt-bike with family and friends. His fascination with weather and its effects on everyday life continues to drive his career in the NWS.